What is 3D printing? Learn more!

3D printing is the latest and most modern form of making products, consumer goods and tools. Also known as an additive manufacturing process. This manufacturing process provides a faster and more accurate end result in small quantities, unlike the injection molding technique. The raw material used by the printer is plastic and called filament. Of course, this material also has several divisions, which I will describe in detail below.

The printing process is similar to normal paper-based printers, but there is also a significant difference. One such difference is that there is neither a toner cartridge nor paper. The filament (raw material) is wound on the print head, which melts it at the right temperature. Then the molten material is blown through a thin needle (nozzle- typically 0.4 mm in diameter). 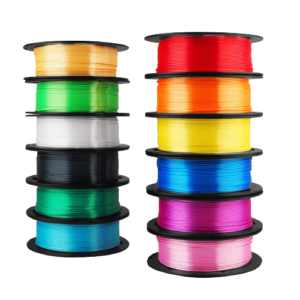 The selected object you want to print is pre-made in a digital code, and the directions of the movement can also be found in this code. The hotbed can only move in one direction, which is controlled by motors. Typically, this is the forward and backward movement. Another important movement that the print head or the hotend can perform is the movement in the “X” direction, i.e., to the right and left. The third and final direction of movement is the height, i.e., the “Z” movement. 3 directions of movement and molten material give the principle of operation of the printer.

Now, let’s take a closer look at the code already mentioned. In fact, this code consists of two parts. One is the programmed description of the model itself, and the other is the specific file type that the printer recognizes and can work with.

The finished model can come from several sources. Such a source could be 3D modeling, design, 3D scanning or the most popular source on the internet. For beginners like me, pages have been created where digital digital sketches of a given object can be downloaded for free or for a nominal fee. Examples of the most popular sites are Thingiverse, Yeggi, MyMiniFactory, ScatchFab, and more.

Once you have the required file, in a technical language a .stl or .obj file, the next step is to create a G-Code. This code plays the biggest role, as it is the basis for controlling the entire printing process. The G-Code includes the movements of the 3 axis based on coordinates, hotbed and hotend temperature, printing speed, infill%, need and rate of support, type (infill), time until printing time, estimated material usage and other important and unavoidable data.

The first and perhaps the most popular substance is PLA or Polylactic acid. Biodegradable, making it an environmentally friendly material. Cereals such as wheat, corn, rice are made and various starches are added. Easy to use, easy to print with it. The choice of colors is also the richest of this material.

A second, also popular material is ABS or Acrylonitrile Butadiene Styrene, which is also the material of the lego building blocks. It is soluble in acetone (nail polish remover solution), so it can be polished afterwards. It is harder and much more durable than PLA, but is difficult to print and releases harmful gases during printing, so it can be used under the right conditions. My products are not made of ABS material!

Next material that transitions between PLA and ABS is PET-G. PET-G is nothing more than the material of a PET bottle (from which we drink soft drinks and water), it only goes through a chemical process. This procedure makes it much easier to apply for 3D printing purposes. It is a very strong material in terms of its properties, but it differs almost from PLA in terms of printing requirements.

TPU is a flexible material that gives an effect that is completely made of rubber.

There are various materials that are combined with metal, wood, carbon fiber, and so on. They are based on PLA or ABS.

It can also be interesting to glow in the dark, which contains phosphorus.

If you find this article useful, please, write your comments here.